One of the most satisfying aspects of smaller residential projects is the chance to make a large contribution to the whole design project.

Often architectural drawings are presented as a fait accompli, however, an engineer’s early involvement is recommended so that advice can be obtained to help avoid costly and complex construction. Suggestions may be made and construction details developed to enhance the building process.

Too often engineers are perceived as a hindrance to the design process with a ‘this is how it is always done’ attitude; this is definitely not our approach.

HMA has a particular interest in residential new build and extension schemes, which offer their own individual design issues and the opportunity to work closely with architect, client and builder. 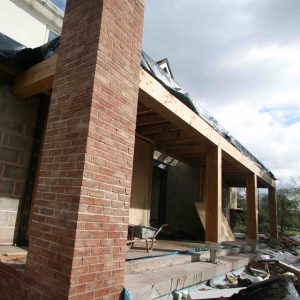 A house refurbishment with architect OMI. An extensive reconstruction of the living areas involving steelwork installed internally to create more open space. An extension to the side and rear of the house with douglas fir exposed external beams which required careful attention to the detailing. 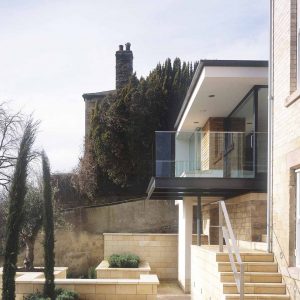 Reworking and extension to a Georgian house on a prominent position on the banks of the river Wharfe. With a garage accessible to the street behind, the extension was built over former cellars which where renovated whilst retaining the original arch stonework. A lightweight steel cantilever balcony extended out from the living area. Designed by OMI Architects, completed circa 2002.
RIBA Regional Award
RIBA White Rose Award 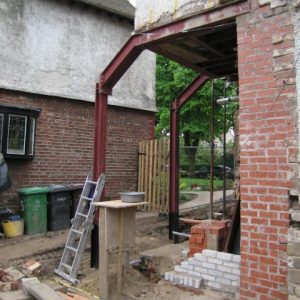 An extension designed by architect Jon Polley for an arts and crafts home in the Chorltonville conservation area, Manchester. It was very much a labour of love for Jon; he agonised over the detailing, the use of natural light and maximising the use of limited space.

The aim was to create a clean, continuous internal space. The corner of the existing house was cut out, with the upper storey now sitting on a cranked steel frame. Whilst exposed, this frame caused amusement for numerous passers by! A larger family living area is achieved with the extension. An oak truss is exposed on the rear facade. Completed 2011.

A project in Chorlton, Manchester, Ayelsby Court was designed by Salford based architects OMI. The elongated houses make clever use of a narrow site adjoining garages to local blocks of flats.

OMI managed to create external interest with the use of feature precast lintels and posts in the corners of the build. Large windows let in a generous amount of light. 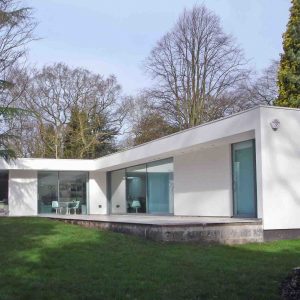 Designed in collaboration with the architect John Riley of MBLA. The clients, Peter and Abby Schaefer, where closely involved in all stages of the design and building process. There were numerous interesting details to achieve – overhanging eaves to the rear courtyard, an elliptical steel post and extensive rooflights. …read more in SIPs Construction. 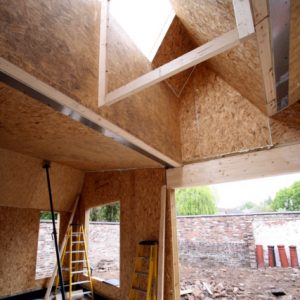 A stand alone house extension designed by Ian Simpson architects for a client at their house in Bowden, South Manchester. The SIPs demonstrates itself essentially as a monocoque shell structure which was part assembled offsite.

The central ‘funnel’ allows light in and an airiness inside the house. It served well as a structural framework to support the sloping roof panels. Made in the workshop and transported whole it is a good example of offsite construction methods. The client: SIP Co Ltd.